One might think the oldest instrument ever located would be some form of drum. A primitive percussion inst 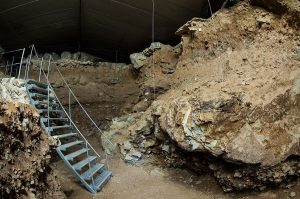 More than 40,000 years ago someone in present-day Germany carved a flute out of bone. Complete with finger holes, this was a serviceable instrument capable of playing multiple notes and chords. The invention of written music did not occur for another 37,000 more years, so what music was played is not known. But music was definitely played, the flute is proof.

Called the Neanderthal flute, this instrument is crude in appearance. Most likely carved from the bones of vultures and ivory of mammoths, only fragments survive. But these fragment are clearly flutes. Hollow tubes about 8 millimeters wide and 34 millimeters long, the flutes show tool marks left by the stone tools used to create them. Each flute includes a narrow mouthpiece, carved at one end.

Although simple, these flutes are significant in their importance to understanding primitive history. The existence of advanced instruments has raised many questions about how neanderthals lived and their social structure.